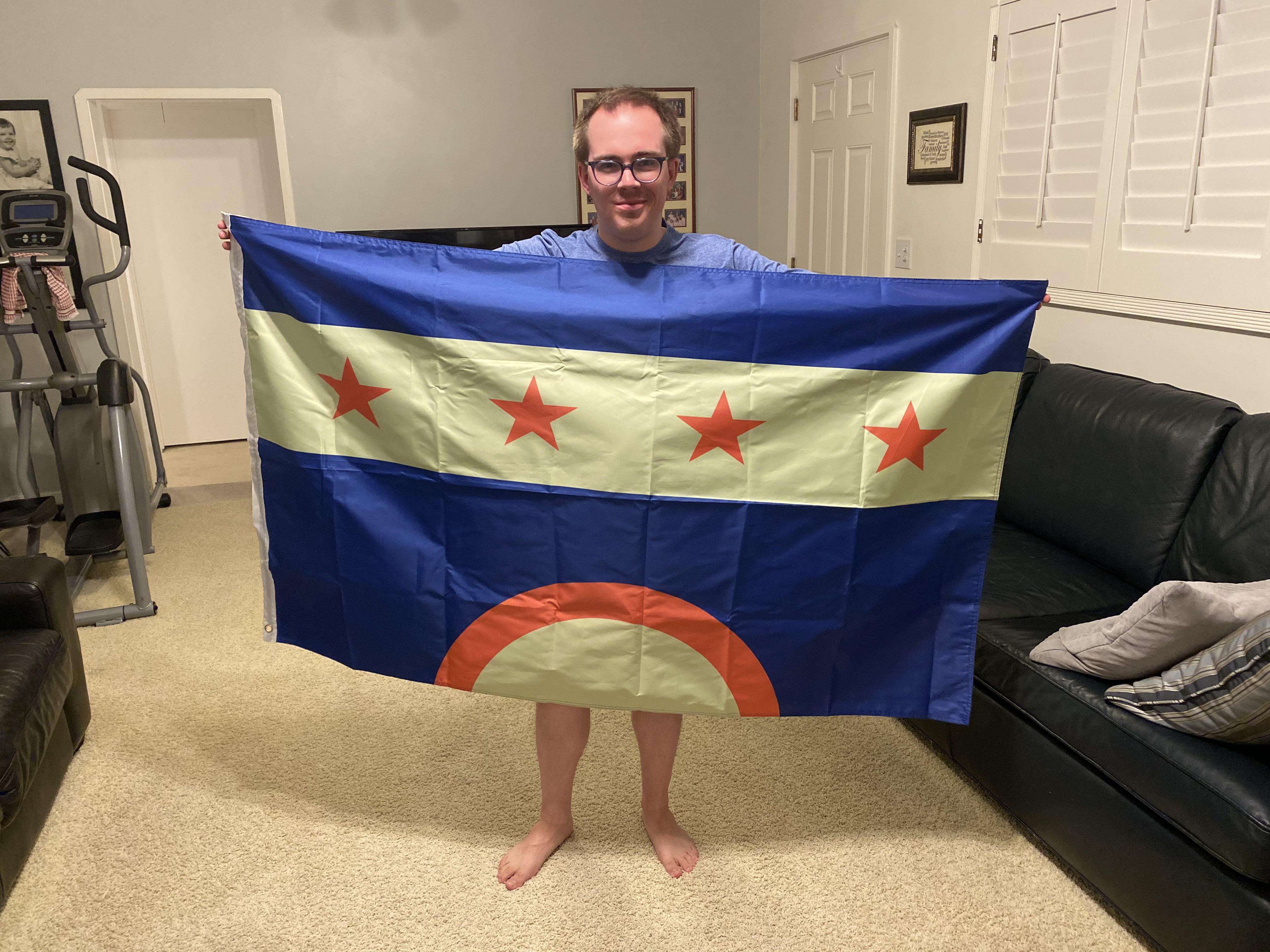 A Flag is Worth a Thousand Pictures

One of the most important lessons I’ve learned in the last decade is the power of narrative and story.

Companies use stories because they compress facts & ideas into smaller packages that are easier to share and identify with. It’s like lossy compression but for ideas instead of music or files.

The spectrum I think of is:

So McDonalds might tell you they have “millions served”, which is impressive, but doesn’t make you feel anything. Can you quote where those customers are or which customers like McDonalds most?

So they tell you a story via a TV commercial about a family that enjoys a trip to McDonalds. This empresses itself on you more than “millions served” - at least you can see yourself in this family now – but it’s still not very memorable.

So they close the commercial with a slogan – “I’m lovin’ it”, which ok, if I asked you whose jingle that was you’d probably know it was McDonalds.

But what is the single most memorable part of McDonalds in the entire world? The thing that best reminds you of who they are:

So if we take Facts > Stories > Slogans > Flags & Logos and turn it into McDonalds:

The point is as you get further down the right you get more information compressed into a smaller space. The McDonalds logo brings a cancatony of thoughts, opinions, and associates with it that the TV commercial and marketing facts do not.

And while I’m using a logo as an example, the same things applies to flags.

A flag is essentially a story you can see.

And every time you see that flag the story is being repeated back to you, and you become that much more likely to remember it.

So why did I make a flag? Because I wanted a quick and instant reminder of the ideas that are important to me.

The 3 main ideas I wanted to include: (many more details below)

Since I didn’t know much about flag design before I used an excellent pamphlet called Good Flag Bad Flag as my guide.

The five basic principles it gives are:

These were my lighthouses in making the flag. I kind of felt that while, hey, I’m not sure if I could make an amazing flag. At least these would prevent me from making a bad flag.

The first thing I started with was deciding on the colors.

The first thing I decided on was the color scheme.

I like bright and bold colors, especially online where they stand out. So the very first thing I decided on with the flag was to use the color yellow. Not too bright as to be garrish, but enough to stand out.

I found a yellow I loved – #F1FF5C – and started cycling through combinations.

I quickly came around to blue and red, and for a while was using this palette

And I even started some preliminary flag designs with it:

But it quickly felt too “pastel” and not bold enough. It was almost like cartoon flag colors and I wanted something stronger.

So I went back to the app and tried a few more combinations until I discovered this:

This has my previously decided yellow, but now the blue and red were much stronger.

After some quick tests with flag designs I decided this was the palette.

(And you might have noticed I’m also using it for my new website that you’re reading this on.)

I was teaching myself Figma as I did this so I started off with some really basic shapes:

The constraint of only being able to make really basic patterns & shapes served me well here. A flag can be literally anything and so by limiting the scope of possibilities it forced me to be creative in ways that produced something simple and straightforward that I still enjoyed.

What started to emerge was the idea of using a blue background as ocean & a sun to showcase opportunity and optimism.

So I continued with some variations:

These were great in helping me figure out the sun. I really liked using the red on yellow, which made it into the final design.

I started playing with what else do beyond the sun and blue ocean:

Neither of these are great, and I felt a little stuck, so I started to to doubt my ocean and sun direction and started making pyramids…

And I still hadn’t even gotten to figuring out how to include my four (formerly 8) values, so at some point that yellow bar in the middle got filled with 8 stars.

So okay, I thought let’s bring the stars back to the original ocean & sun. I improved the star design and ended up with this:

You can tell this is starting to get pretty close to the final design. I could have left it here honestly, but there was something about 8 stars that felt too big. Simplifying the values would make it both easier to fit on the flag, but also to fit the ideas into my brain, which was the whole point of this exercise.

So I went down to four:

The blue stars look good, but I didn’t feel like they contrasted enough with the rest of the flag, so I made them red.

Which gets us to the final flag...

The Symbolism of the Flag

The blue background represents the ocean and opportunity, in a very literal “blue ocean” POV that there is opportunity everywhere. One needs to only dip their toe in the water to participate. It’s important to remember that there's a whole world of fascinating things happening all around me, the vast majority of which I’ll never even know about.

Remembering that I’m lucky enough to even participate in “the ocean” is important to me, and so aspire to take full advantage of it.

The sun is about optimism. I created the slogan Optimism 2020 for this year (and what a year to choose such a slogan, but I digress…) Win lose or draw the sun is gonna show up for work every single day. So it’s worth planning for the future, and being hopeful that the future will be better than the past. That’s certainly been the case of the last few hundred years.

The sun is also a guide on how to live because it’s consistent as hell. It’s more important to do a little every day than to do a lot only occasionally. Consistency compounds over time into something bigger. Every day no matter what happens the sun’s there, doing the work, playing its role.

I have a value system of sorts that I’ve been thinking a lot about in 2020. You’ll see on some of the flag drafts there were 8 lines or stars - that felt too complicated for a flag, so I actually went back and combined some of the values together to make 4.

I wrote another post called Efficiency is an Excuse to Not Do the Actual Work. We like to complicate things so much, when very simple decisions will actually give us progress. For exameple, it discusses how we prefer researching workout clothes versus getting immediately down to the ground and doing pushups.

Speed is a way to remind myself to default to action. I’ve also heard this phrased by Shaan Puri as Motion not Direction. The point is that you learn by actually doing, not by sitting and thinking or researching or analyzing.

There’s an activation energy level required to most fully live life, and it tends to go up as you get older. And I’ve always kind of struggled with trying new things, which can be self-defeating and destroy optionality.

A well-lived life is earned when you go out even though you’re tired, or you run the extra mile through the pain, or you strike up a conversation with a perfect stranger.

“Life should not be a journey to the grave with the intention of arriving safely in a pretty and well preserved body, but rather to skid in broadside in a cloud of smoke, thoroughly used up, totally worn out, and loudly proclaiming 'Wow! What a ride!'"  - Hunter S Thompson

The Truman Show is one of my all-time favorite movies. There’s a part where the creator of the show is interviewed and asked why Truman doesn’t break out on his own. Why can’t he escape?

The show creator answers “We accept the reality of the world we’re presented.”

This quote scares me into being alive. We have to be vigilant in remembering that there’s no reason the default reality that we’re given is the right one. Knowing what you want is 80% of getting it, but you first have to actually know what you want.

No one - no adult, no authority, no organization or governing body - no one is going to tell you your reality isn’t right for you. No one is going to make the best reality for you. You have to do it on your own.

No Adults reminds me that we’re all on the same level playing the same game, and that ultimately I’m the agent of my life.

IMO the single most important attribute to success is determination. Resolving to do a thing and then waking up every day and pushing the ball a little further forward towards success.

Consistency trumps intensity. Doing a little every day beats doing a lot every once in a while.

It’s also a reminder that many people fail not because they lack motivation, but because they’re not honest with themselves about what they actually want. When your entire being and identity is aligned with your target, motivation isn’t even a thing you ask about yourself. The whole reason you’re even waking up in the morning is to achieve your objective.

To me determination means making sure I understand what I actually want, and then doing a little every day to get there.

Making Things is Better than Not Making things

This was a fun project and gave me something to do while cooped up during COVID. If you’d like to make your own flag let me know, there was plenty that went into this that didn’t quite fit into this blog post.