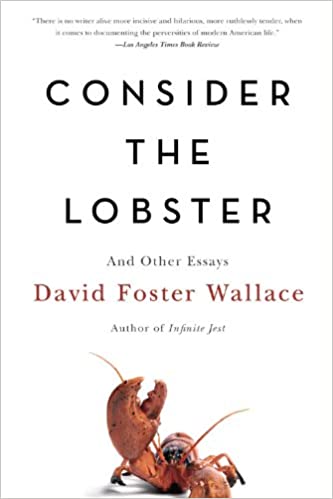 A bunch of stories by one of my favorite authors. The highlights below are mostly from Up, Simba, covering John McCain's first presidential bid.

We live in an era of terrible preoccupation with presentation and interpretation, one in which the relations between who someone is and what he believes and how he “expresses himself” have been thrown into big-time flux. In rhetorical terms, certain long-held distinctions between the Ethical Appeal, Logical Appeal ( = an argument’s plausibility or soundness, from logos), and Pathetic Appeal ( = an argument’s emotional impact, from pathos) have now pretty much collapsed—or rather the different sorts of Appeals now affect and are affected by one another in ways that make it nearly impossible to advance an argument on “reason” alone.

If for any reason you happen to find yourself sharing this particular student’s perceptions and reaction, I would ask that you bracket your feelings just long enough to recognize that the PWM instructor’s very modern rhetorical dilemma in that office was not much different from the dilemma faced by any male who makes a Pro-Life argument, or any atheist who argues against creation science, or any caucasian who opposes Affirmative Action, or any African-American who decries racial profiling, or anyone over eighteen who tries to make a case for raising the legal driving age to eighteen, etc. The dilemma has nothing to do with whether the arguments themselves are plausible or right or even sane, because the debate rarely gets that far—any opponent with sufficiently strong feelings or a dogmatic bent can discredit the argument and pretty much foreclose all further discussion with a rejoinder we Americans have come to know well: “Of course you’d say that”; “Easy for you to say”; “What right do you have to

And when Senator John McCain also says—constantly, thumping it hard at the start and end of every speech and Town Hall Meeting—that his goal as president will be “to inspire young Americans to devote themselves to causes greater than their own self-interest,” it’s hard not to hear it as just one more piece of the carefully scripted bullshit that presidential candidates hand us as they go about the self-interested business of trying to become the most powerful, important, and talked-about human being on earth, which is of course their real “cause,” a cause to which they appear to be so deeply devoted that they can swallow and spew whole mountains of noble-sounding bullshit and convince even themselves they mean it. Cynical as that may sound, polls show it’s how most of us feel. And we’re beyond not believing the bullshit; mostly we don’t even hear it now, dismissing it at the same deep level, below attention, where we also block out billboards and Muzak.

Right now Bullshit l’s Press Liaison, Travis—23, late of Georgetown U and a six-month backpack tour of Southeast Asia during which he says he came to like fried bugs—is again employing his single most important and impressive skill as a McCain2000 staffer, which is the ability to sleep anywhere, anytime, and in any position for ten-to-fifteen-minute intervals, with a composed face and no unpleasant sounds or fluids, and then to come instantly and unfuzzily awake the moment he’s needed. It’s not clear whether he thinks people can’t tell he’s sleeping or what. Travis, who wears wide-wale corduroys and a sweater from Structure and seems to subsist entirely on Starburst Fruit Chews, tends to speak with the same deprecatory irony that is the whole staff’s style, introducing himself to new media today as either “Your press lackey” or “The Hervé Villechaize of Bullshit 1,” or both. His latest trick is to go up to the front of the bus and hook his arm over the little brushed-steel safety bar above the driver’s head and to lean against it so that from behind it looks as if he’s having an involved navigational conversation with the driver, and to go to sleep, and the driver—a 6'7" bald black gentleman named Jay, whose way of saying goodnight to a journalist at the end of the day is “Go on and get you a woman, boy!”—knows exactly what’s going on and takes extra care not to change lanes or brake hard, and Travis, whose day starts at 0500 and ends after midnight just like all the other staffers, lives this way.

It would, of course, have been just interesting as hell for Rolling Stone to have gotten to watch the top-level meetings at which John McCain and John Weaver and Mike Murphy and the rest of the campaign’s High Command hashed all this out and decided on the press release and response ad, but of course strategy sessions like these are journalistically impenetrable, if for no other reason than that it is the media who are the true object and audience for whatever strategy these sessions come up with, the critics who’ll decide how well it all plays (with Murphy’s special little “advance notice” spiel in the Flint F&F being the strategy’s opening performance, as everyone in the room was aware but no one said aloud).

A real leader is somebody who, because of his own particular power and charisma and example, is able to inspire people, with “inspire” being used here in a serious and noncliché way. A real leader can somehow get us to do certain things that deep down we think are good and want to be able to do but usually can’t get ourselves to do on our own.

A leader’s true authority is a power you voluntarily give him, and you grant him this authority not in a resigned or resentful way but happily; it feels right. Deep down, you almost always like how a real leader makes you feel, how you find yourself working harder and pushing yourself and thinking in ways you wouldn’t be able to if there weren’t this person you respected and believed in and wanted to please.

In other words, a real leader is somebody who can help us overcome the limitations of our own individual laziness and selfishness and weakness and fear and get us to do better, harder things than we can get ourselves to do on our own.

But if you’re subjected to great salesmen and sales pitches and marketing concepts for long enough—like from your earliest Saturday-morning cartoons, let’s say—it is only a matter of time before you start believing deep down that everything is sales and marketing, and that whenever somebody seems like they care about you or about some noble idea or cause, that person is a salesman and really ultimately doesn’t give a shit about you or some cause but really just wants something for himself.

But if you, like poor old Rolling Stone, have come to a point on the Trail where you’ve started fearing your own cynicism almost as much as you fear your own credulity and the salesmen who feed on it, you may find your thoughts returning again and again to a certain dark and box-sized cell in a certain Hilton half a world and three careers away, to the torture and fear and offer of release and a certain Young Voter named McCain’s refusal to violate a Code. There were no techs’ cameras in that box, no aides or consultants, no paradoxes or gray areas; nothing to sell. There was just one guy and whatever in his character sustained him. This is a huge deal. In your mind, that Hoa Lo box becomes sort of a special dressing room with a star on the door, the private place behind the stage where one imagines “the real John McCain” still lives. And but now the paradox here is that this box that makes McCain “real” is, by definition, locked. Impenetrable. Nobody gets in or out. This is huge, too; you should keep it in mind. It is why, however many behind-the-scenes pencils get put on the case, a “profile” of John McCain is going to be just that: one side, exterior, split and diffracted by so many lenses there’s way more than one man to see. Salesman or leader or neither or both, the final paradox—the really tiny central one, way down deep inside all the other campaign puzzles’ spinning boxes and squares that layer McCain—is that whether he’s truly “for real” now depends less on what is in his heart than on what might be in yours. Try to stay awake.

Is the real point of my life simply to undergo as little pain and as much pleasure as possible? My behavior sure seems to indicate that this is what I believe, at least a lot of the time. But isn’t this kind of a selfish way to live? Forget selfish—isn’t it awful lonely?

For there are certain tendencies we believe are bad, qualities we hate and fear. Among these are sentimentality, naïveté, archaism, fanaticism. It would probably be better to call our own art’s culture now one of congenital skepticism. Our intelligentsia distrust strong belief, open conviction. Material passion is one thing, but ideological passion disgusts us on some deep level.

The mature, postconversion Dostoevsky’s particular foes were the Nihilists, the radical progeny of the 1840s’ yuppie socialists, whose name (i.e., the Nihilists’ name) comes from the same all-negating speech in Turgenev’s Fathers and Sons that got quoted at the outset. But the real battle was wider, and much deeper. It is no accident that Joseph Frank’s big epigraph for Vol. IV is from Kolakowski’s classic Modernity on Endless Trial, for Dostoevsky’s abandonment of utilitarian socialism for an idiosyncratic moral conservatism can be seen in the same basic light as Kant’s awakening from “dogmatic slumber” into a radical Pietist deontology nearly a century earlier: “By turning against the popular utilitarianism of the Enlightenment, [Kant] also knew exactly that what was at stake was not any particular moral code, but rather a question of the existence or nonexistence of the distinction between good and evil and, consequently, a question of the fate of mankind.”